The Global Game Jam is happening around the world at real locations! Founded in 2008, inspired  by the many game jams before it, such as the Indie Game Jam, Ludum Dare and Nordic Game Jam. GGJ was a project of the International Game Developer’s Association (IGDA) from 2009-2012. The 1st annual GGJ was held on January 30-February 1, 2009 with overwhelming success. Over a thousand participants in different countries have participated in the game creation event for the past years.

Last January 28, 2011, the 2nd Manila Game Jam (part of the GGJ) was held at the University of the Philippines Information Technology Training Center (UP ITTC) in Quezon City with 60 gaming enthusiasts gathered for 48 long hours. The Global Game Jam was simultaneously staged in 44 countries, 170 locations with 6,500 participants.
For the first time ever, the world’s largest game creation event is now in Cebu. The Global Game Jam is open for students, professionals, amateurs, independent game developers and even hobbyists who want to create games in various platforms. Individuals are welcome to join and choose a group that is participating in the game. They will be exploring game development process such as programming, iterative design, artistic expression, and narrative construction. The 3-day event encourages people to come together and collaborate in teams, focused on developing games.

Each GGJ edition has a theme distributed worldwide through the local organizers at the start of the jam. Participants start to work in teams, brainstorming and creating games around the theme. This is decided by the “Theme Committee”: a team of game industry professionals that discuss different themes and options for a period of time before the jam occurs.

The Global Game Jam is organized by Red Trident Games, a local independent game studio founded by Clint Hennesy Cagang, which started its operations on February 28, 2017. Red Trident games envisions GGJ Cebu Site to help improve the growing game creation community and/or industry in Cebu; and to inform people that there is an alternative hub for gamers who want to get a breakthrough. They are constantly been involved with Cebu Game Dev in hosting meet-ups, workshops, and competitions.

The  Global Game Jam (GGJ) is set to be held at The Company on Bldg.4, JDN Square, P. Remedio Street, Banilad, Mandaue City, 6014 Cebu on January 26 to 28 , 2018. The event welcomes all game developers, game programmers, game enthusiasts, and game artists to participate in the event. The GGJ aims to create a worldwide creative buzz in games and explore the process of the development in all kinds of related fields. The best part? Admission is free.

If you’d like to know more about the event, visit:
https://globalgamejam.org/about. 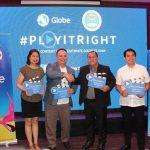