The Task Force on Youth Development (TFYD) of Barangay Tejero was given a special award for being the most organized and most active organization in the community level.
The awardees received plaques of recognition and P15,000 each while TFYD-Tejero received a plaque of recoognition and P3,000. Each finalist received P1,000 and a plaque of recognition.
The finalists for the high school category were: Franz Danielle Banguiran (University of San Jose Recoletos Basak Campus), Martin Lorenzo Del Rosario (Don Bosco Technological Center), Riziel Punes Saladaga (Tisa National High School) and Matthew Jose Estenzo (University of San Carlos North Campus).
For the college category, the following made it as finalists: Rechie Bejasa (Cebu Normal University), Erlyn Ivy Rago (Cebu Institute of Technology University), Deither Abe Abilong (University of the Philippines Cebu College) and Denzel Yorong (University of the Philippines Cebu College).
The finalists in the community (barangay) leaders category were: Jonathan Marasigan (Tejero), Michelle Daño (Pasil), Carlo Codeniera (San Jose) and Rhea Almario (Lahug).
Among other criteria, Cebu City Youth Development Office Chief Jess Dela Cruz said the high school and college categories were chosen based on their academic performance, leadership skills, values and socially-responsible initiatives. The community leader awardee was chosen based on the quality of organized projects and the impact of these projects in the community.
Dela Cruz said they received a total of 41 nominations in the three categories. The nomination forms and supporting documents were screened and five finalists were chosen per category.
“YOUSEAL is a venue for inspiration and sharing of best practices. This year, we will be fine-tuning the awards program and invite former finalists and awardees to help us in crafting more youth development oriented projects for the youth of Cebu City,” said Dela Cruz.
This year’s YOUSEAL Awards invited an esteemed panel of judges, who interviewed the finalists last February 22 at the Imelda Room of Montebello Villa Hotel.
Multi-awarded youth leader and journalist Cris Evert Lato-Ruffolo, who sits as the chairperson of the board of judges, said it is important to recognize the youth’s contribution in nationbuilding to further motivate them to initiative more projects with direct impact on their schools and barangays.
“It is always a refreshing experience to be in a room full of young people who spoke about their inspiration and motivation to succeed, the challenges they faced, the projects they organized and their commitment to serve,” said Lato-Ruffolo, who was an active student and community leader in her college days at UP Cebu. 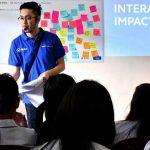