Why PBA? Philippines is a country of basketball fans. As a proof, we are even dubbed as the world’s capital of makeshift basketball court. We are torn every basketball season as to which teams do we belong.
The Philippines professional basketball league is yet to set another standard aside from bringing in world-class basketball event. PBA is gunning for another milestone to put in their records this coming Sunday on the opening of its 40th season.

A New Venue and A New Record

This Sunday is going to signal the start of Season 40 of the PBA and it looks like they’re already spicing things up a notch. First up, they have chosen the perfect venue for the opening salvo of the season – Philippine Arena situated at Bocaue, Bulacan which is known as the biggest domed arena in the world. This colossal structure, built by the Iglesia Ni Cristo, will be able to accommodate 55,000 people at most, making it the perfect venue for big events such as this.
And if the anticipated event is going to be a full house, it will break the record of the biggest attendance in Philippine basketball by a very wide margin. The record was held by the Game 7 Semi-finals match between Barangay Ginebra and San Mig Coffee last season in the Smart Araneta Coliseum, garnering a total of 24,883 attendants. This was then usurped by 24,896 fans from the UAAP finalists NU and FEU in their Game 2 match last October 8. This record might still be broken when the finals concludes in the Big Dome this coming October 15.
Despite that, it will still pale in comparison if PBA’s Season 40 kickoff gets a full house attendance. And not only will it shatter the largest attendance record for the Philippine basketball games, this event will put itself on the list of the Top 5 largest basketball crowd gatherings in the whole world – the USA currently holds these top 5 positions with the NBA under their belt.
Before we get ahead of ourselves, lets take a look as to how the ticket sales are going. Based on reports, there are less than 20% of them remaining. That pretty much speaks for itself – they’re selling like hotcakes. The PBA Commissioner gave his thanks to the fans that have continued to give their support, “I am happy to report that our opening for the PBA’s 40th season this Sunday is being met with enthusiastic response from our fans. I have been informed that 80 percent of the venue tickets have been sold, translating to some 35,000 fans already confirmed to attend.”

The opening day of PBA Season 40 also marks the debut of the two newest teams of the league. Kia Sorento, a team owned by Columbian Autocar Corporation and Blackwater Elite, owned by Ever Bilena Cosmetics, Inc., will be playing on the first game for the opening day. One of the most iconic athlete not only in the Philippines but in the world, Manny Pacquiao, will be playing for Kia Sorento as a playing coach – he will be on the Point Guard position. He’ll be playing with a couple of PBA veterans like Rich Alvarez and Reil Cervantes.
Former NCAA MVP Sunday Salvacion will lead the Blackwater Elite team against them this coming sunday. It is to be noted as well, that these two teams have met in the pre-season games, with Blackwater winning 88-77.
For the second game, veteran teams Ginebra and Talk N’ Text will face off with each other, each vying for their first win for this season. Mark Caguioa and Jayjay Helterbrand will be leading their team against Jimmy Alapag’s team.
More Info
For the PBA Opening alone, KIA Motors has offered a free ride to everyone who wants to watch the opening of the 40th season of the PBA. Ginia Roxas-Domingo said that the company is planning to move 200 shuttles which will carry an estimated 10,000 fans to the said venue. “We offered kasi to shuttle 10,000 of our fans. We will announce separately. But we have already tapped 200 buses to shuttle about 10,000 fans,” she said.
NLEX also contributed by making those buses pass their roads to the Philippine Arena for free. “OK na kami. Sagot na namin yan. For the fans and for the PBA,” said Ramoncito Fernandez, CEO and President of the Metro Pacific Tollways Corporation.
As we go nearer to the said date, it is apparent that the hype is on an all time high. This is going to be an event that will surely put Philippine basketball into a global spotlight. And with that in mind, one couldn’t ask for a better venue for this important event to be held.
Question: will you be there as this history in the making unfolds? 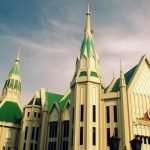