A kid was gripping his mom’s hand saying, “I want that!” Couples holding hands while walking. A bunch of teenagers strolling in the mall. They saw gelatos in display.

Who gives the best free taste of gelato with no limit? Gelatissimo Philippines!

It was the best decision because by chance, they just celebrated their anniversary! Other than that, they were satisfied. Sweet memories are best shared with Gelatissimo Philippines, whether it’s with a family member, friends, or better half.

As Gelatissimo celebrated its 8th anniversary, they offered a very low price for all their loyal patrons; only 88 pesos for one scoop. Eighty-eight pesos, that’s right!

A countdown was made prior to the anniversary via Facebook and Instagram Page. News spread like wildfire and people got so excited to buy gelato for only 88 pesos. Comment threads were filled with tagged names. Even the day of the celebration, people went in and out of the store branch.

Other customers went with their lovers or partners, who stayed hours in the cafe.
Mini-games were prepared by the crew like Roll-a-Dice, and Pick and Win. Freebies were given to the customers like Toppings, Gift Certificates, Free Scoops, as a part of the games.
A bunch of medical students even said they were fans of Gelatissimo Philippines ever since it came to Cebu.

“It’s the best ice cream,” said Delbeth, one of the players for Roll-A-Dice.

Every month, the company creates The Flavor of The Month. This month’s highlight was the Spongebob, which was launched earlier this month. It was made and marketed for kids and kids at heart. It’s made with vanilla, white chocolate and topped with candy sprinkles. It’s mouth-watering presentation make kids want to grab a bite.

You can enjoy our flavor of the month (Spongebob) in more ways than one. What do you want to order today? Shake or gelato in cone? ?? #Gelatissimoments #HappyBirthdayGelatissimoPH #gelato #shake #sweet #dessert

Aside from the Flavor of the Month, most of the customers who were around the celebration ordered Chocolate-flavored gelatos. These are mostly American Chocolate, Biscottino, Chic Chip, Choc Mint, and Coconut with Chocolate.

Mae Fuentes, Manager of Ayala Branch said that she was overwhelmed that Gelatissimo Philippines was first established in Cebu of all places in the Philippines. She’s been with Gelatissimo for 5 years now. She also shared that their customers like to go back again and again. The customers’ satisfaction was the main factor why the brand has remained as one of the most popular ice cream stores in the Philippines.

Kate Allison Dela Pena, Marketing Head, said that ice creams are supposed to be more on fats and all but with Gelatissimo it’s different. Their gelato can be 99% fat-free for fat-conscious people. Customers could also choose their gelato to be nut-free. For vegans, they can opt for the dairy-free and gluten-free variants. It really depends on the lifestyle of the customers.

Gelatissimo is also planning to renovate place their interior design by next year to be even more Instagram-worthy.

Simultaneously, they will soon be launching another branch in IT Park to expand and let customers experience the real taste of Italia, for the love of gelato courtesy of Gelatissimo Philippines! 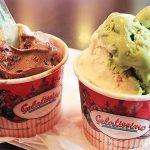